A pioneer in laparoscopic surgery 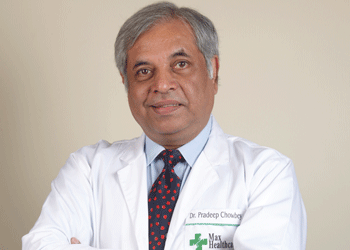 An internationally renowned laparoscopic surgeon, Dr PradeepChowbeyis considered one of the first surgeons to perform laparoscopic cholecystectomy in North India. He has worked with a determination to develop, evaluate and propagate Minimal Access, Metabolic & Bariatric Surgery in India and Asian subcontinent. DrChowbey earlier established the Minimal Access, Metabolic & Bariatric Surgery Centre at Sir Ganga Ram Hospital, New Delhi, in 1996, which was the first such centrein the Asian subcontinent.

DrChowbey and his team have been instrumental in the technological advancements in the field of laparoscopy, hernia and obesity for thelast two decades. Chowbeyaims to provide less painful treatment to every patient. He has spearheaded   pioneering clinical worksto set the guidelines for laparoscopicand endoscopic hernia surgeries.

A recipient of Padma Shri in 2002 for his notable medical achievements, Chowbey currently serves as the Vice Chairman and Chief of Surgery and Allied Surgical Specialties and Director of Max Institute of Minimal Access, Metabolic and Bariatric Surgery (MAMBS) at Max Healthcare Institute Ltd., New Delhi.He is alsoan advisor to various government bodies, universities, medical institutions and hospitals.

Dr Chowbeygot featured in the Guinness Book of Records 1997 and Limca Book of Records in consecutive editions (2000- 2012) for performing most minimal access surgeries. He has also actively participated in more than 700 workshops and conferences,and has trained more than 5,000 surgeons from across the globe.

I appreciate your work and may this healing touch reach all the needy ones.

- His Holiness the Dalai Lama

The positions he holds:

Past President: Obesity and Metabolic Surgery Society of India (OSSI)

Trustee and Past President: Indian Association of Gastrointestinal Endo-Surgeons (IAGES)