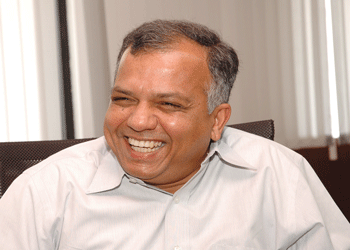 Sam Santhosh is the Chief Executive Officer of SciGenom, a genome company based in Kochi, which specialises in DNA sequencing. In an exclusive interview with Future Medicine, he says that genomics will fuel the next revolution in medicine

What inspired you to start SciGenom?

The completion of the first draft of the human genome by the International Human Genome Project in 2001 originally attracted me to this field. With my background in software engineering, I was intrigued by the opportunity produced through understanding and leveraging the genomic source code which is the language of life for all living beings. However, I had no connection with biology after high school and so it took a few years of reading and evening classes to get a thorough grasp of the subject. During this period, the DNA sequencing technology went through a revolution by exponentially reducing sequencing cost while increasing processing speed. For example, sequencing the first human genome took 10 years and cost about $3 billion, while, as of now, one can sequence a human genome in two weeks for $5,000.

With the advent of these new technologies called Next Generation Sequencing (NGS), I saw the opportunity of creating a company for genome sequencing and data analysis. Genomics can create dramatic changes in healthcare, agriculture, environmental protection, bio-fuel, and so on. Understanding the language of life now is a momentous turning point just as the development of language itself for communication was a major tipping point in the history of our species about 30 to 40 thousand years ago. By deciphering the genome, humanity will be able to move to the next level of evolution.

This belief gave me the inspiration to start SciGenom the name meaning Science of the Genome.  Though I have been living in the US for the last 20 years, I felt that with the changing global economic climate, I should start my new company in India and since I am from Kerala, I chose Kochi as the starting location.

How progressive and developed is the Indian genome industry and what are its advantages or shortcomings in comparison with the West?

The Indian genome industry is still in its infancy and has yet to fully develop. At the same time, we have many advantages compared to the West, includinglower manpower cost, strength in information technology and a growing economy which makes us unique. The disadvantages are lack of scientific leadership and research expertise, and unpredictable regulations driven by populist politics. The first can be overcome by attracting Indian NRI scientists back to India and by collaborating with other research institutions in different parts of the world. The second requires time and improvements in education throughout India.

What are the ethical issues preventing genome research companies from going the whole hog?

A critical issue is patient confidentiality and ensuring the individual understands what their genetic results mean. Another dilemma is ownership of genomic data. With advances in genetic testing for disease prediction, a major question arises over what becomes the information and who determines its use.

Tell us about your tie-ups with international companies, agencies and governmental bodies, and your areas of research. Are you faced with any policy bottlenecks?

We have research collaborations with Dr Schusters lab in Penn State College, Pennsylvania, and with the University of Toronto in Canada. Our areas of research are in molecular diagnostics, cancer treatment and metagenomics. In molecular diagnostics, our goal is to reduce the cost of genetic tests and make it affordable to all sections of the population. In cancer, we are looking at familial cancer and some forms of cancer that are more prevalent in India and hence have not attracted much attention in the West. In metagenomics, we are exploring the microbial communities in several water sources and soil samples to better understand the effect of bacteria and other microbes on human health and society.

Policy bottlenecks have not significantly affected our operations till date. However, some outdated rules like the restriction on sending human samples abroad as well as lack of regulations in medical diagnostics creates confusion in the field.

Were any of the Indian companies or individuals part of the international human genome project? How much of the research findings have made it to the mainstream medical practices so far and how far is India in making these solutions available to the common man?

India was not part of the original human genome sequencing project. However, CSIR sponsored Human Variome Project starting in 2003mapped variations in1,000 medically important genes across various groups in India.  Currently, India is part of the International Cancer Genome project where scientists from across the world are using sequencing technologies to understand cancer.

Research findings from the human genome project and the cancer genome projects are starting tomake personalised medicine a reality. However, given that such applications are in its infancy,it will be sometime before all the information is fully applied in mainstream practice of medicine. For those interested further on this topic I would urge them to read The creative destruction of medicine by DrEric Topol.

Is India lagging behind in streamlining genomic education and research? Do you have any suggestions?

India is definitely lagging behind in genomic education and research. In this regard, I have a few suggestions to make. When it comes to research, we need to follow the US model which has proved to be successful. The Indian government has already done well in the area of funding by providing large number of grants and creating public-private partnership schemes. What we need to do is attract not only NRI scientists to come back but also foreign scientists to set up labs in India and provide them sustained support with grants covering longer periods of time.

In education, we need to develop our own model. With the worlds largest youth population, poor infrastructure, lack of qualified teachers, etc we have significant challenges. One way to solve this gap is by leapfrogging over older models as we did with computers and telecommunications. We need to enable long distance learning, leveraging the internet and modifying the education system so that what the student learns matches the industry requirements. Furthermore, greater emphasis needs to be given to science  I would even recommend having a science track in MBA programmes like they have for Finance, Marketing, HR, IT etc. This will generate more business managers with a proper understanding in science who can lead our country into the next decade.

What are your future plans?

SciGenom will continue to build its current offerings in DNA sequencing, Bioinformatics and Medical Diagnostics. Later this year,we plan to spin off our medical diagnostics division (MedGenome) as a separate company with a CLIA certified central lab in Chennai and satellite labs in all major cities throughoutIndia. We plan to raise about $5M for this expansion.

Do you think India can emerge a leader in the area of genomics with its scientific manpower edge over others? How can we arrest brain-drain and make brain-gain in this field?

It will be difficult for India to take leadership in this field, but we can become a strong player if we play our cards well. At present, we dont have an edge in scientific manpower we lack expertise and leadership. However, brain-drain in the short term still works well for us, as we lack the facilities to teach them all, our youngsters can go out and learn in the best labs across the globe. What we need to do is to attract them back,along with already-trained NRI scientists,with advantageousopportunities in India.

We also have to have a realistic understanding of where we stand today. India, at present,has less than 5,000 qualified biology scientists in the whole country.The US, on the other hand, has that number in one of their largeruniversities and they have hundreds of such universities. Their spending on research is also astronomical compared to what we can afford. So we need to be clever in developing a strategy. It will be good for India to understand how smaller countries like South Korea and Singapore are contributing by focusing on a specific area critical to their national interest. For example, Singapore faces a shortage of fresh water  about 70 per centof it comes from Malaysia. Singapore has made it their goal to become self sufficient within the next five years. They aim to do this by achieving 100 per cent reuse of waste water, by using genomic technologies in waste water treatment. Arguably, they can achieve world leadership in that field. India can learn much from these approaches.

Do you think Indian hospital and healthcare chains are at par with their Western counterparts in the field of genomics? Is there a difference in the Indian and Western approach towards this emerging science?

Applying genomics to healthcare is new everywhere in the world. However, the Westis adopting it much faster than us but they also have their own challenges due to the more complex healthcare systems and role played by insurance companies. The problem with our approach is that we lack a clear plan. We have to make a cohesive approach taking into account our genetic heritage, diversity and challenges.

Is the common man in India aware of the real benefits of genomics? Do you think there should be awareness campaigns to generate more interest in this subject?

Even in the West, the common man has yet to become aware of the full benefits of genomics. In India, we definitely need to have awareness campaigns and other schemes for all sections of society to understand and take advantage of this knowledge. For example, farmers can breed better varieties of crops if they understand the genes that affect many of the traits that they are looking for.