Bringing smile on their faces 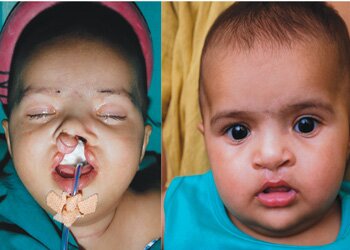 Smile is the most beautiful expression but there are some people who are just waiting to smile at least once in their life time.

Yes! The cleft lip patients are the ones who are dying for an opportunity to express their happiness through their smile. These hapless children who are suffering from a congenital     deformity caused by abnormal facial development during gestation have been condemned to a life of neglect and ridicule.

Recognising the plight of these cleft lip and cleft palate patients of the world, Charles Wang and Brian Mullaney decided to embark on a project which could help cleft lip patients to lead a happy life ever after. The project named Smile Train was launched in 1999 in New York. Though this project was launched in US, the mission of treating cleft patients was much before started by Dr KR Rajappan, one of the senior most plastic surgeons in Kerala. Dr Rajappan along with his wife CK Nalini established Specialists Hospital in Kochi in 1983.

I started attending operations for cleft lip and cleft palate in 1975. Those days, there were only a few hospitals which dealt with these types of cases. As cleft patients were plenty in number, I thought providing treatment to these people will be the greatest service I could do. I used to travel all over Kerala, visiting private hospitals and identifying poor cleft patients. The treatment, food and accommodation were provided for the patients and their families

He treated more than 10,000 patients suffering from cleft lip, cleft palate deformities. In 1980, Rajappan was awarded the Individual International Meritorious Service Medal by International Lions president Lyod Morgan for his free services to the poor people.

With a sole aim of eradicating the problem, Rajappan happily extended his support to the Smile Train project and became one of the partners of this divine mission. The project with main focus on cleft patients started its philanthropic activities in India in 2000. This international venture made hospitals and clefts surgeons equal partners in this programme and helped them treat as many cleft patients as they could.

The Smile Train project was a real boon to the cleft patients as their service reached every nook and cranny of India. This project has really helped many patients to come out of their pathetic life, he says.

In India, one in 700 people are born cleft lip and the main reason for this deformity is believed to be food habits. Cleft lip and palate patients are mostly found in the developing countries.

Dr KR Rajappan is also planning to start more innovative outreach programmes for the poor who are suffering from cancer.