Perhaps, no woman in the world is worshipped so reverently like the Valia Amma, the supreme priestess of the legendary Mannarasala Snake Temple, in Alappuzha district in Kerala. The long queue of devotees for a glimpse of the divine face of the Mother tells how venerable the Mother is, and how deep-rooted is the faith the devotees have in her and the snake deities in the temple. An embodiment of love and simplicity, the ValiaAmma hardly leaves her home and interacts with others. She lives in a four-chamber house called Illam (dwelling place of the Brahmins) as a symbol of divinity and sacredness.

MannarasalaNagaraja Temple, the foremost centre of snake worship, is a shrine with a difference. As you enter the temple premises, the cool atmosphere inside will definitely refresh your mind and body. Myriad stone images of snakes guard the path leading to the shrine. Don't get scared, as the intertwining serpentine vines hanging from huge trees on both sides of the path appear to be snakes if you see it from a distance. The reluctant sunrays seeping through the thick green leaves of the trees, playing light and shade over the vines in the gentle winds making different patterns on earth may at times amuse you. The most striking thing here, however, is the holy communion of nature and man.

The beliefs and rituals associated with the temple are different from most other temples in the state. The absence of a male priest in the Mannarasala temple is most conspicuous. Instead, a priestess, MannarasalaValiaAmma (Great Mother), performs the rites in the temple. 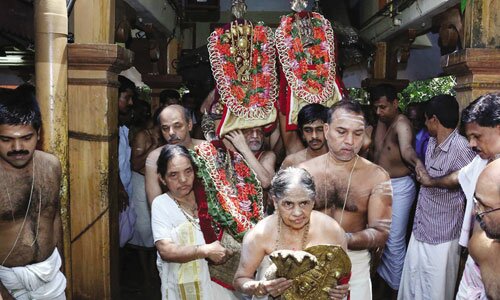 Uma Devi Antharjanam, wife of the late M.G.NarayananNamboothiri, is the ValiaAmma of Mannarasala today. She became ValiaAmma on 24th October 1993, when she was 64 years old. She was headmistress of a school before becoming the supreme priestess.

The ValiaAmma is the soul of Mannarasala Temple. Amma has a special way of offering poojas (rites), and she herself must perform the poojas in the sanctum sanctorum.

Only the women married into the family become eligible for priesthood. Once a person is chosen as Amma, she has to lead an ascetic life and do penance. A year of learning follows and then only she can conduct poojas. The norm is such that in case the Amma falls sick, no pooja is conducted during that period.

The story of  Mannarsala dates back to the  time of  Parashurama, the axe-wielding sage who reclaimed the land from Gokarnam to Kanyakumari from the sea by throwing the axe in the length of the land he required, with the permission of the Lord of the Oceans, Lord Varuna, to give away to the Brahmins as part of his penance. The Brahmin families, who were rehabilitated at Mannarsala inthe reclaimed land, found the place infested with poisonous snakes, the water undrinkable and the land unfertile and they left the place. A sad Parashurama sought the help of Lord Varuna again, who told him to pray to Lord Shiva.  Shiva advised Parashurama, his dear disciple, to pray to Vasuki, the king of snakes. 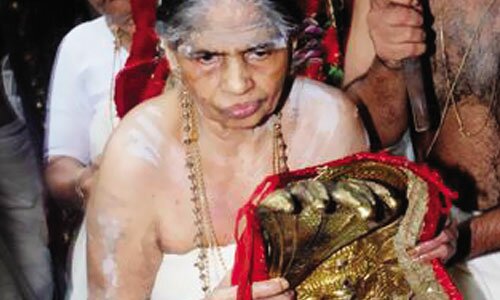 Vasuki (Nagaraja), pleased with the prayers, told Parashurama that there would not be any problem from the snakes, provided they were given a place near the Illam( the dwelling  place of Brahmins) and offered prayers. Thus small forests, known as Sarpakavu in Malayalam, came up near the Illams and the snakes lived happily there. But one day, a wildfire broke out and engulfed the forests. Many reptiles were burned to death in the fire. A few that could flee the fire were dying due to severe burns. As the men were away from home at that time, the women seeing the snakes writhing in pain and struggling for life came out to help them, pouring water over them and applying herbal medicines on the burn wounds. The cured snakes were so pleased and the king of snakes Vasuki appeared himself before the family and blessed them. The head of the family, VasudevanNamboothiri, had no children, even though he had married for a long time. Vasuki blessed Namboothiri and his wife SrideviAntharjanam with all prosperities and gave a boon that they would soon become parents and also the childless couples who pray at the place would also be blessed with children. SrideviAntharjanam got pregnant not any later and gave birth to two children in due course. But one child was a snake with a divine appearance, believed to be the incarnation of the king of snakes. Both of them grew up together. The human child took care of the family and the divine child gradually retired to its vault in the Illam and later entered the state of samadhi. The present family members are successors of VasudevanNamboothiri and SrideviAntharjanam.

The vault in which Nagaraja (Vasuki) is believed to be living is seen with utmost reverence by the members of the household. They admire him with great respect and acknowledge him with the name Muthassan and Appooppan (grandfather).

It is believed that before entering the vault, the divine serpent talked to his mother, Oh, Mother, its time for me to leave you, but I will live in the underground vault of the Illam and nobody except you should come there and that also only for offering poojas. After you, the eldest woman in the family should do the poojas.

After the time of mother Sridevi, the senior most Brahmin lady in the family takes over as the supreme priestess and she is given the title ValiyaAmma.

The temple premises reverberate with pulluvanpattu (songs rendered in praise of Nagaraja by members of the Pulluva community). The childless couples do a special offering, UruliKamazhthal, keeping a traditional bronze vessel upside down in the temple premise.

It is said that the 'UruliKamazhthal' offering with devotion and prayers has helped numerous couples to have children. This temple also has a special turmeric paste which is supposed to have healing properties.

The main festival of the temple is MannarasalaAayilyam, observed on the day of Aayilyam star in the months of Kanni and Thulam (September and October). All the serpent idols in the grove and the temple are taken in a procession to the Illam where special offerings of NurumPalum (made of rice flour and milk), Kuruthi(a red liquid made of turmeric and lime) and cooked rice are made. MannarasalaAmma carries the idol of the Nagaraja and the procession is conducted with great reverence and pomp.

The temple administration is entrusted to a trust of family members, which provides all possible facilities to the multitude of devotees. The trust also runs an upper primary school.

The Mannarasala temple is located about three kilometres to the south-east of the bus station on N.H.47 at Harippad in Alappuzha district, Kerala.