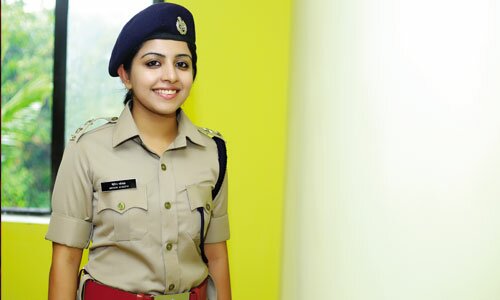 No officer in the  state police force  was  so famous before assuming  her assigned  position. Merin Joseph, the Assistant Superintendent of Police under training in Ernakulam Rural District, Chengamanadu Station, is a  class apart.  She made a stormy entry into  her professional life through  Facebook.  It kicked up a  little  controversy. However, Merin takes it  in her stride and believes  it  worked in her favour. In fact, it made her dealing with the public easy.

Excerpts from an interview:

I was at the  Aluva SP office  at 2.45 pm, 15 minutes earlier and  at sharp 3, the time given to me for an interview  with ASP Merin Joseph, an official came to the reception and guided me to her room.  The pretty woman in uniform sitting behind the table  welcomes me with a warm smile. While taking my seat,  I said to myself    no wonder if this face launched a thousand comments. She is indeed very beautiful, a beauty with brain, as they say.

Her words betray her look.  They are full of enthusiasm, confidence, determination and boldness to take on the challenges her job offerss. While listening to her, you can be sure that she is a tough police material.

Merin was a topper in her Plus Two board exam and a  university gold medalist.  An alumna of the prestigious St. Stephens College Delhi, she cleared  the civil service examination  in the first chance itself, with high marks, which  enabled her to get a home state posting. She is the third  Malayalee woman IPS officer  in the  home cadre after R. Srilekha  and B Sandhya, two brilliant predecessors.

 It was my mother who was keen to see me in the uniform as an IPS officer. My father was a civil service officer and I also wanted to be a civil servant from my childhood days itself. I was sure that at some point of time, I should give the civil service exam as I was looking forward to a dynamic job. For me, I just wanted to be in one of the top three sectors. I was able to clear the exam in my first attempt. IPS was my second preference. But after getting selected to IPS, I was very happy to take it,  Merin says. 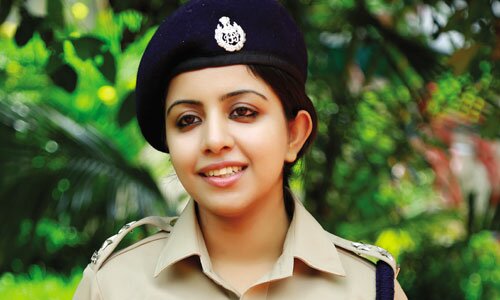 Merin says her  hobby is reading .  I have a great passion towards books and the best thing I love about my hobby is that I can pursue it anywhere. Mine is a job which calls me to move around a lot, she  said without hiding her passion for fiction.

The 11-month training period at Sardar Vallabhai Patel National Police Academy in Hyderabad is still the most memorable days for Merin Joseph, There we had a jungle house attachment for one week in the jungles of Andhra Pradesh. That was part of our anti-Maoist training. We went to the jungle with minimum supply of food and water. We were walking with heavy load on our shoulders for some 20 kilometres. That camp really helped me to discover myself, Merin said. She remembers,  I was slightly hydrophobic, but  after my training I not only learned to swim but was also able to clear my 10-metrre diving test.

Challenges actually arise from the fact that people think it is a male dominated profession. So to some extent, I feel that I have to be slightly more assertive to make my presence felt and prove Im also equally capable as that of a male officer. Apart from that, I feel my female identity has many times worked to my favour.  People believe women are more sincere in doing their job so to that extent they have been more receptive to me. My subordinates have accepted my leadership and I have not seen any reluctance from their part to obey my instructions,  she smiles in satisfaction.

Merin finds Kerala  is still  a patriarchal society even though the state asserts 100 per cent literacy. The state is far better than other states in  the country but still we tend to think women should not do certain kind of jobs. IPS is not seen as a woman-friendly job. Parents hesitate  to send their daughters for IPS. I think we are yet to break away from our  patriarchal mind-set and try to emancipate and empower our women,  she  emphasises.

She likes to tell all women to have confidence in themselves. We should realise we are not inferior to men. We certainly have certain roles in the society that cannot  be played by men. In that way, women are unique. Dont get confined to any single identity. We can balance our traditional roles along with other roles. Each woman should try to contribute something to the betterment of the society,   she said.

This 25-year-old  pretty young cop got married to Dr. Chris Abraham early this year. She is happy with the way her parents-in-law are supporting her.

My vision is to be remembered as an officer who brought a noticeable change and as a people -friendly person. I make use of maximum opportunities to interact with people . Whenever Im invited to attend functions in schools and colleges Im happy to be there, she said.

She tells  the youth to explore all the possibilities that todays world provide them. Widen your horizon and set high goals. Be socially committed and dont get into bad habits and ruin your life.