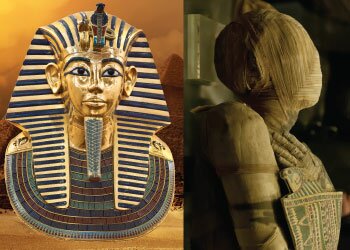 Like the eternal secrets of birth and death, life after death also remains a mystery, which could not be unravelled yet. While some think it is the end of a journey, that is life, some others think it is not an end but the beginning of another journey. It is generally believed the soul is immortal and once it leaves the body, it flies away, while the body it left behind degenerates or become ash and melts away into the earth. But ancient Egyptians, who lived thousands of years ago, Before Christ, believed that after death they travel to another world where they start a new life again. They also wanted all things they used including the dead body, the perfumes the dress, the food etc., while entering the new world. So the survivors of the dead would put those things along with body in their graves. The bodies were preserved through a process called mummification. Here, Future Medicine is trying to explain what is mummification and how the dead bodies are preserved for so long undamaged, with inputs from the Internet

Mummification is a type of preservation of the dead that was most notably practised by the Ancient Egyptians. During the Old Kingdom (2750  2250 B.C.) this long process of embalming the dead was an extravagance reserved for pharaohs, whose mummies were placed in opulent tombs or pyramids along with riches, foods, furnishings, and anything else to comfort them in the afterlife. Though unintentional mummification, owed mostly to Egypts arid and sandy climate, occurred as far back as prehistoric times, it wasnt until around 2600 B.C. when the Egyptians began to practice mummification as a purposeful and ritualistic process. It was a long and expensive procedure, which is why only kings were mummified in the beginning.

The Egyptians practised and perfected mummification for nearly 2,000 years, continuing the process well into the Roman period (40 B.C.  AD 364) of their history. As time progressed, the process became more streamlined, and eventually less expensive. Towards the end of the use of mummification, more Egyptians could afford the process, and it was no longer solely reserved for royalty or the wealthy (though it was still pretty rare for commoners to be mummified).

Religion was a very important part of the mummification process. Because most of those whose remains were mummified were kings and pharaohs, a lot of ceremony and prayer was involved in ensuring the body and spirit were prepared for the afterlife. Priests played roles in every step of the process, including wrapping the mummy with linen strips, placing the internal organs in the specially prepared canopic jars, and blessing the entrance of the mummys tomb at the funeral. 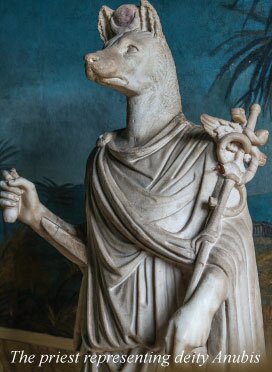 Why was it so important to the Egyptians to preserve the body? The Ancient Egyptians believed that the body was the house for the soul. Even after death, the Egyptians believed that the spirit could only live on if the body was preserved forever. If the body was lost, so too was the spirit. In Egyptian religion, the spirit was made up of three parts: the ka, the ba, and the akh. The ka remained in the burial tomb, using the offerings and objects placed within it. The ba was considered the soul of the person, and it was free to fly outside of the confines of the tomb. And it was the akh that travelled to the Underworld for judgment, and to gain entrance into the Afterlife.

Mummification as a scientific process of preserving the body, was very effective. During the process, as much moisture was removed from the body as possible, along with most of the internal organs. This helped to slow down the process of decay. Mummies as old as 3,000 years have been found in remarkable states of preservation. Well-preserved mummies, such as that of the young Pharaoh Tutankhamen, have provided a wealth of interest and information for researchers and history buffs alike. Today, Egyptologists and other scientists study ancient mummies in order to understand Ancient Egyptian diseases, medical treatments, life spans, and even genetics. The process of mummification perfected by the Ancient Egyptians provides a fascinating window through which the world can look into and learn about their cultural practices and scientific innovations.

A mummy is the body of a person (or an animal) that has been preserved after death.

Who were the mummies?

They were any Egyptian who could afford to pay for the expensive process of preserving their bodies for the afterlife.

Why did the Egyptians make mummies?

The Egyptians believed in life after death. They believed that they had to preserve their bodies so they could use them in the afterlife.

What is the afterlife?

The Egyptians believed that when they died, they would make a journey to another world where they would lead a new life. They would need all the things they had used when they were alive, so their families would put those things in their graves. Egyptians paid vast amounts of money to have their bodies properly preserved. Egyptians who were poor were buried in the sand whilst the rich ones were buried in a tomb.

How were mummies made?

It takes a very long time, from start to finish, it takes about 70 days to embalm a body. The priest in charge would wear the mask of a jackal representing the deity Anubis.

The mummy was now ready for its journey to the afterlife.

Natron is a natural salt, composed of sodium carbonate and sodium bicarbonate with traces of sodium chloride and sodium sulfate. It was used by the ancient Egyptians to dry out the bodies. 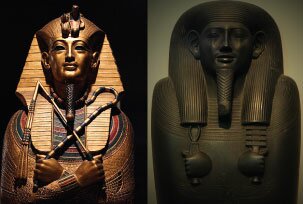 Why did they leave the heart in the body?

The Egyptians thought the heart was the centre of intelligence and emotion.

Who was the deity of mummification?

Anubis was the deity of mummification. He had a human body and the head of a jackal. His job was to prepare the bodies of the dead to be received by Osiris.

What objects did they put in Egyptian tombs?

Ancient Egyptians were buried with their belongings and the tomb walls were painted with scenes from the dead persons life. The objects included furniture, games and even food was placed in the tombs for the long After Life journey!

Where were the pharaohs buried?

In the Old and Middle Kingdoms (2628-1638 BC), Egyptian kings were buried in pyramids. About 50 royal pyramids have survived. They were built on the desert edge, west of the ancient capital of Memphis.

The pyramids are the stone tombs of Egypts kings - the Pharaohs.

Find out more about pyramids

Why did the Ancient Egyptians build pyramids?

The Egyptians believed that if the pharaohs body could be mummified after death the pharaoh would live forever. The tombs were designed to protect the buried Pharaohs body and his belongings.