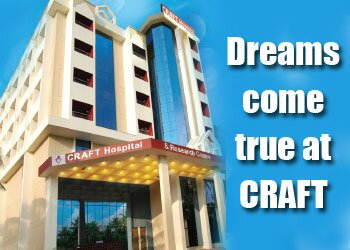 The names CRAFT Hospital & Research Centre, Kodungallur in Kerala and its founder and Medical Director professor Dr C Mohamed Ashraf are etched in gold in the history of In Vitro Fertilisation ((IVF) treatment in India. Dr Ashraf is one of the pioneers of the IVF treatment and his hospital is equipped with the state-of-the-art techniques and facilities. Dr Ashraf talks to Sumithra Sathyan, Co-ordinating editor of Future Medicine, about the relevance of IVF treatment,  the history of it and the advanced facilities available at CRAFT for a successful and risk-free IVF treatment

At CRAFT, one of the leading multi- speciality hospitals in India, the idea of IVF was conceived way back in 1998 when its MD and Chairman Dr C Mohamed Ashraf came back after finishing his Assisted reproductive Technology (ART) training in Singapore. With the vision of creating a full-fledged hospital which caters to all needs of couples longing for a child under one roof, he began the procedures at Kodungallur in Kerala. 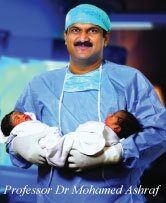 After acquiring all advanced equipment and setting up the facilities, the first batch of test tube babies was ready for transfer in November 1999. In an IVF clinic, the most important person and the captain who sails the ship is the Chief Embryologist. Only he has the expertise to isolate the mature egg from the follicular fluid aspirated from the ovary and inject the single good sperm. This is cultured for 3 to 5 days and the embryologist observes and prepares 1 or 2 good embryos and gives it to the infertility consultant for transfer. In India even now there is a dearth of good embryologists who are actually qualified to perform the process. The condition was much worse way back in 1998 when CRAFT was planning to start the procedures.

CRAFT never compromised on quality, hence entered into a contract with a German team of embryologists from the Lubeck University, Germany, says Dr. Ashraf. They used to stay for a week, complete the procedures and get the embryos ready for transfer. The first batch had 10 cases where all patients produced sufficient eggs, of which seven patients had good quality embryos. After the transfer, three were found positive, of which two patients continued pregnancy. Both the children are studying in the 9th grade now.

CRAFT has done almost 13,000 cycles of IVF- ICSI in 9,777 patients so far, out of which we now have more than 11,000 babies born, including twins and triplets. More than 800 couples were blessed with two or three kids in a gap of three to eight years following freezing of the embryos and then transferring them on two or more occasions. This is something very unique for CRAFT in India where spaced transfer has been performed with embryos from a single IVF-ICSI procedure.

At CRAFT, we follow the ethical policy of no donor sperm and egg.  We believe your baby and the gift of procreation is God given. We had 58 couples who earlier had donor embryo transfer, but failed to conceive. All of them got conceived at CRAFT from their own embryos and as many as 300 couples for whom donor transfer was strongly advised by various centres, but they refused and came to CRAFT and got their own babies, Dr Ashraf said.

By implementing the state-of-the-art techniques, CRAFT Hospital has secured pre-eminence in India, in the field of infertility treatment. The insistence on ethical standards throughout the treatment is the characteristic feature of CRAFT. Accepting the profound responsibility entrusted by the society, on the basis of the lofty achievements, CRAFT is offering the first fertility insurance scheme in India, CRAFT - IVF Suraksha scheme, to provide relief and hope to the couples traumatised by infertility. In this scheme, there absolutely lies no fear of losing the money if the treatment fails. This gives an opportunity for the patients to undergo the treatment without any tension, and to achieve success.

She had blue eyes and blond hair 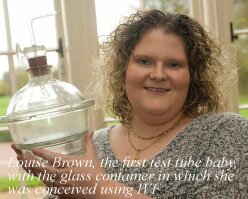 Her parents, Lesley and John Brown, had been trying to conceive for nine years. Lesley faced complications of blocked fallopian tubes.  The Browns were referred to Dr. Patrick Steptoe, who was then working along with Dr Edwards on finding an alternative solution for conception. On November 10, 1977, Lesley Brown underwent the very experimental in vitro (in glass) fertilization procedure

Throughout her pregnancy Lesley was closely monitored. Nine days before the due date she developed high blood pressure and the doctors decided to advance the delivery via Cesarean section.  At 11.47 pm on July 25, 1978, Louis Joy Brown was born. The bundle of joy had blue eyes and blond hair.

Louis grew up normally without any health problems and married Wesley Millender.  Dr. Edwards attended their wedding. On 20 December, 2006 she gave birth to their son Cameron, conceived naturally.