They walked ahead of time 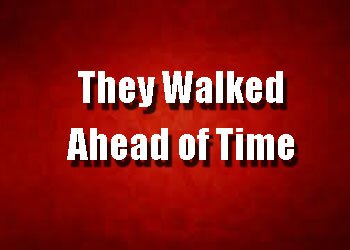 Not everybody is born with a halo of greatness. Some really do. Some achieve it through sheer hard work. But a characteristic that can be attributed to their greatness is that they are ALL born a class apart from the ordinary mortals

Intelligence Quotient (IQ) is a measure, a score obtained from the test of a persons intelligence or how sharp his brain works. These tests are for certain areas like language fluency, three dimensional thinking, etc.

A look at 10 highest IQ holders of the world, who walked ahead of time:

William James Sidis was born on April 1, 1888 in New York City. He went to a grammar school at the age of six and graduated within seven months. He went to Harvard at the age of 11 and by the time he was adult, he knew over 40 languages. He specialised in the field of mathematics. At Harvard, he was physically threatened by some of his fellow students due to which his parents got him a teaching assistant job at Rice University in Texas. He died in 1944 due to some brain damage and it was the same reason his father had passed away.

Terence Tao was born on July 17, 1975 in Australia. Being a mathematician, he specialises in harmonic analysis, partial differential equations, additive combinatorics, ergodic Ramsey theory, random matrix theory, and analytic number theory. He is currently teaching at University of California, Los Angeles. He exhibited extraordinary mathematical abilities from an early age and knew basic arithmetic when he was 2 years old.. He received his bachelors and masters degrees at the age of 16.

Christopher Hirata was born on 30th November 1982. He has an IQ of 225. When he was 12 years old, he had already done his college level course on physics and mathematics. At the age of 13 he won a gold medal in international science Olympiad. He was working with NASA on a project to conquer Mars when he was 16 years old.

Kim Ung-yong was born on March 7, 1963 in South Korea. His IQ as calculated is 210.  At the age of just six months, he had started speaking. At the age of three, he had learnt many languages like Japanese, Korean, German and English. And at the age of 14, he solved complex calculus problems on Japanese television.

Garry Kasparov was born on 13th April, 1963 in Soviet Union, Russia. He has an outstanding IQ of 194. He is a Russian chess grandmaster, a former World Chess Champion, a writer and a political activist, considered by many to be the greatest chess player. He won his first championship which was Soviet Union Junior Chess championship, by the age of 13 years. In 1985, he won the first title of world championship in Moscow by earning twelve and a half points.

Marilyn Vos Savant was born on August 11, 1946 in the United States of America. She is highly skilful in being an American magazine columnist, author, lecturer, and playwright.  In 1985, she was registered into the Guinness World Records for having the highest IQ amongst women.

Leonardo di ser Piero da Vinci was born on April 15, 1452, in Italy. He is often described as the archetype of the Renaissance Man, a man of unquenchable curiosity and feverishly inventive imagination. He was extremely talented and dedicated to his work, especially art. His famous artworks are Mona Lisa, the Last Supper, and the Vitruvian Man. He was skilled as a painter, sculptor, architect, musician, mathematician, engineer, inventor, anatomist, geologist, cartographer, botanist and writer.

Judit Polgar was born on July 23, 1976 in Hungary. She is the strongest female chess player in history. She achieved the title of Grand-master when she was 15 years old and was the youngest to do so until then. She is the only woman to have won a game from a current world number one player and has defeated former world champions in either rapid or classical chess.

Albert Einstein was born on March 14, 1879 in Germany. His IQ was estimated between 160 and 190. The right handed physicist did his schooling from Germany. His devotion towards science started with a compass that his father showed him. What made him work was reason behind what makes a compass needle move. Apart from physics, he had a keen interest in mechanics and mathematics.

He worked in the field of quantum theory and was the one to develop the general theory of relativity which was the turning point in the field of science. He is also very well known for his massenergy equivalence formula E = mc2. For his services to theoretical physics, and for his discovery of the law of the photoelectric effect, he was awarded with a Nobel Prize. At the age of 76, he died on April 17, 1955 due to some internal bleeding.

Stephen William Hawking was born on January 8, 1942 in the United Kingdom. He is devoted to the core fields of science and has worked on gravitational theorems in the framework of general relativity, and many theoretical predictions on black holes stating that they emit radiations and known as hawking radiation. He attended Oxford University in 1959 when he was only 17 years old. He was the first to explain the cosmology thesis by a union of the general theory of relativity and quantum mechanics. He is a vocal supporter of the many-worlds interpretation of quantum mechanics.