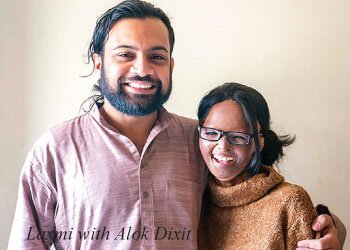 Laxmi, a victim of an acid attack in New Delhi nine years ago and  now a standard-bearer for Stop Acid Attacks campaign, has been selected by the US for the prestigious International Women of the Courage Award

Laxmis story is heart-rending. Please dont ask who is Laxmi. You may know  so many  girls  with the name Laxmi,  but this  laxmi is different, a living example for how   cruel a human being can be against another for  virtually no reasons.  She was a beautiful  girl  nine years ago, aged 16, like your sister or friend, living happily in New Delhi  with her parents and  young brother.

One day, in 2005,  she was waiting for bus at the busy Khan Market  in New Delhi. Suddenly  an acquaintance  sprung up from nowhere and threw acid on her face , disfiguring her permanently.   The attack was pre- planned.

Her attacker, a  32-year old brother of one of her friends, wanted to  use the acid to destroy Laxmis face for  refusing  to respond favourably  to his romantic advances.

 I kept screaming for help but no one stepped forth. Everyone ran in the opposite direction. I could feel my flesh burning and I covered my eyes with my arms. That reflex action saved me from losing my vision. Laxmi  says about the  never ever forgettable incident that ruined her life forever.

Acid corrodes quickly. Within a few seconds, I had lost my face, my ear had melted and both my arms were charred black. A politicians driver took me to a hospital, where I was to stay for the next 10 weeks. The doctors had to remove the entire skin from my face and keep it bandaged.  Ive already had seven surgeries and need at least four more before I can go in for plastic surgery, provided I can afford it.

I learnt to live with the physical pain but what hurt me more was the way the society reacted. My own relatives stopped seeing me, as did my friends. I stayed indoors for eight years . Laxmi says .

Is it our fault ? 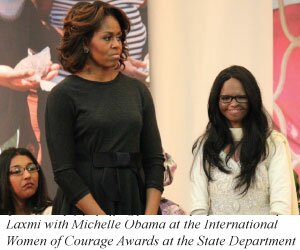 Laxmi  tried to pick up a job but nobody was willing to hire her. She tried in BPOs, banks and beauty parlours but all she  got was rejection. Nobody wants to hire acid victims because of the way they look.

 But I ask you, is it our fault? Society accepts those born blind or those who are physically challenged. Why are we shunned? If you ask me, we are worse off than rape victims because with our faces burnt, we seem to have lost our identity. Laxmi says .

The only support she got was from her parents, doctor , her lawyer Aparna Bhatt and from the couple at whose house her father worked. They paid for the surgeries and are still in touch with Laxmis family .

As  her parents were trying  cope with the tragedy in her life, her  brother came down with tuberculosis and her  father died. She was shattered for the second time.

 After my fathers death, being the eldest in the family, besides Smy mother,  I had to take  care of the family. My mother had to be  with my brother all the time.  I felt  really upset that she could not spend  any time with me.

I gathered myself together and pursued my case in court. My lawyer had filed a petition in the Supreme Court, asking for a ban of the sale of acid. Laxmi says.

Slowly, she started getting in touch with the  other victims, most of whom are blinded or have lost their hearing. Each one of them are poor and cannot afford multiple surgeries.

She started an online petition and was happy when 27,000 people signed it. She went to the Home Ministry to submit it to  the minister, Sushil Kumar Shinde.  We waited for three hours but he didnt have even five minutes for us. I had to finally ambush his car to hand over the petition. Laxmi says.

In the meantime, Nahim Khan, the man who had attacked Laxmi with acid, went to jail after the court awarded him a seven-year sentence.

Many acid attack victims never return to normal life: they often go great lengths to hide their disfigurement. But Laxmi did not hide herself.

Life has been  slowly picking up.  Her work for the  acid attack victims  has  been noticed and recognised  internationally.  Her Stop Acid Attacks campaign was selected  by the US for the prestigious International Women of the Courage Award.

There have been changes  in her personal life too.  Last year she met Alok Dixit, a 26-year-old  journalist  who supported  her campaign.  They fell in love  and  decided to live together. She has also found a job  as a television news anchor.

Laxmis petition made the Supreme Court to order the Indian central and state governments to regulate immediately the sale of acid, and the Parliament to make prosecutions of acid attacks easier to pursue. Much is left to be done.