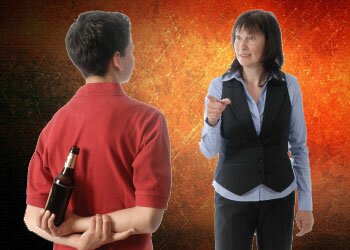 Blame it on parents. If children look up on their parents as role models and listen to their advices and grow up according to their guidance, they will never get addicted to intoxicants


In our milieu, the apprehensions regarding the escalation in the consumption rate of intoxicants by the student community is mounting day by day. What might be the reason for this scenario? Is there any enduring solution to this predicament? Even when questions on such issues are rampant among media debates and public deliberation, each parent lives in a fools paradise of his/her own, trusting and considering their child as a perfect role model who could hardly deviate to such detrimental acts. It is a miserable fact that, by the time these parents realise the magnitude of this entanglement, their children would have become a real addict.

We can never blame that generation, that was born during an arduous age when it was hard to earn even the elementary education itself, for their aspiration to provide their child the benefits of higher education, for their desire to make their child reap the yields of dignity which they scarcely could and for their endeavors to nurture and nourish them properly. But, they forget the fact that children may not grow to be an ideal role model by lavishing all the luxuries and facilitating all the comforts. Entire discussions on this specific subject matter should commence from the basic issue that today parents are unable to up bring their children in tune with the psychological and physiological growth and transformation that they undergo during his progress into adolescence.

Excess control, extra care and extreme concern are factors that can invariably influence the mental condition of a child. Our generation has none but ourselves to blame that we fostered our children like broiler chicken by providing nothing but fast food just to generate doctors and engineers out of them and in turn denied those children the care, comfort, affection and security as promised in grandmas tales.

Those parents, who have to explain to their children that this is gooseberry since they raised their children without making them taste the sweet and sour tang of a gooseberry, are the ones who strive hard to cover their bygone days up. If a mother has bound his children with tears, love and sacrifice they will never get addicted to intoxicants. If they consider their father as an admirable role model his precious guidance and advices will remain forever in his mind like the delightful memories of a hailstorm. It is high time that the society realised that each addicted ones are emblematic of things going topsy-turvy.

Children will choose their own paths towards the realization of their dreams and will trounce the pitfalls of persuasions when we begin to consider them as primarily as children and provide them adequate love, care and concern and enable him to decipher right and wrong and by permitting him choose his likes. The parents should assess whether they are a failure in creating a ground for the same or not. In the minds of each parent there must be a strong determination that they will not let their child to be a slave to such intoxicants. Unless and until the society, that is anxious of the future of the emerging generation, takes this responsibility Kerala will turn into   a paradise of psychic patients.

The parents, who are blind with love for their child, who cannot see why his son turned out to be an ardent follower of Bob Marley and when he started using intoxicants for the first time, should undergo an introspection about his failures in fulfilling his parental duties than be satisfied with the discovery of the fact that my son is spoilt out of bad companionship.

No doubt, when we raise our children as the promising, free citizens of tomorrow, having responsibilities and liabilities to the community instead of considering them as mere children, we can stop the children from perishing with the use of intoxicants.