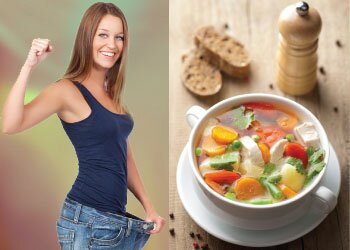 Start a meal with a cup of soup and you may end up eating less. It doesnt matter if the soup is chunky or pureed, as long as its broth- based. You want to keep the soup to 100 to 150 calories a serving. So skip the dollops of cream and butter.

Pregnant women who eat a prudent diet, rich in vegetables, fruits, whole grains and drink plenty of water have a significantly reduced risk of preterm delivery, suggests a study. A traditional dietary pattern of boiled potatoes, fish and cooked vegetables was also linked to a significantly lower risk.These findings support dietary advice to pregnant women to eat a balanced diet, including vegetables, fruits, whole grains, and fish and to drink water. Preterm delivery (before 37 weeks of pregnancy) is associated with significant short and long term ill-health and accounts for almost 75% of all newborn deaths. Evidence shows that a mothers dietary habits can directly affect her unborn child, so researchers based in Sweden, Norway and Iceland set out to examine whether a link exists between maternal diet and preterm delivery.

Eating three or more burgers a week may boost a childs risk of asthma and wheeze -- at least in developed nations reveals a large international study. Conversely, a Mediterranean diet, rich in fruit, vegetables, and fish seems to stave off the risk, the research shows. The research team base their findings on data collected between 1995 and 2005 on 50,000 children between the ages of 8 and 12 from 20 rich and poor countries around the world. Their parents were asked about their childrens normal diet and whether they had ever been diagnosed with asthma and/or have had wheeze. Just under 30,000 of the children were tested for allergic reactions, to see if diet also influenced their chances of developing allergies. Eating three or more burgers a week was associated with a higher lifetime prevalence of asthma and wheeze, particularly among children with no allergies in rich countries. A heavy meat diet, however, had no bearing on the prevalence of asthma or wheeze.