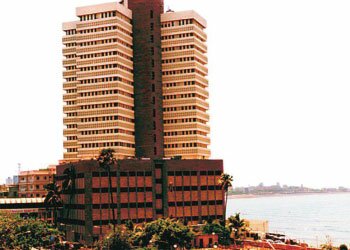 Backed by 63 years of experience and expertise, PD Hinduja Hospital & Medical Research Centre today is an ultra-modern multi-specialty tertiary care hospital committed to Quality Healthcare for All. Having completed its Diamond Jubilee in 2011, the hospital leaves no stone unturned in keeping up with the latest technology and techniques, clinical excellence and various aspects of hospital operation to enhance its services to the people. Though it had a small beginning as an OPD clinic in 1951, its strong vision and determination make it one of the best hospitals in India 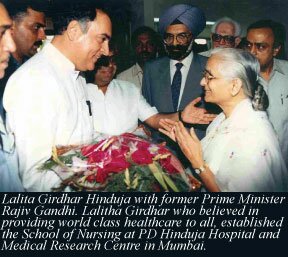 The PD Hinduja Hospital & Medical Research Centre in Mumbai had a small beginning as an OPD clinic on December 10, 1951. It added in-patient facilities and more services later and became a 402-bed, ultra-modern tertiary care hospital in a short span of time. With the help of a strategic advisory contribution by Massachusetts General Hospital (MGM), Boston, a world class infrastructure was created at the hospital to provide the highest quality of care to the patients.

Appalled by the poor health facilities existed in India in the early years of Independence, PD Hinduja, industrialist and a philanthropist, founded the hospital with a noble vision to provide Quality Healthcare for All.He believed that healthcare is the birthright of every citizen and no Indian would suffer because of lack of adequate medical facilities. It was a time when people sought better treatment abroad.

Ever since, the hospital has pursued quality through people, processes and technology. The hospital has now more than 100 full time consultants and many of them are renowned and respected across the globe for their medical care and research. 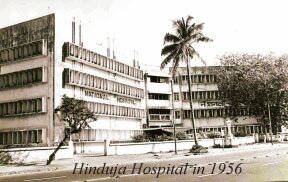 Right from the beginning, the institution recognised the need to develop the three pillars of healthcare: Academics, Research and Clinical Work. The result of which is evident as some of the renowned doctors working at the hospital today, have emerged from the academics herein. Also displaying the research ability through the in-house research studies which have earned credibility worldwide, the hospital runs DNB courses in 23 specialties; MSc and PhD programmes in research; technical courses for technicians and a Nursing College that offers BSc, MSc and PhD programmes.

It became the first hospital in 2006 to have a College of American Pathologist (CAP) accredited laboratory (the first lab in South Asia to be CAP accredited), in 2009 it became the first hospital to win IMC Ramakrishna Bajaj Award for Quality; the same year it became the second hospital to have NABH accreditation in Mumbai; in 2010 and 2013 it got the Best Prax recognition in the strategic planning category and in 2011, was awarded the ISO 27001 Certification for Information Security Management Systems. It has HACCP accreditation by DNV Netherlands, which is the apex certification for food and the NABL accreditation for its lab. The lab also is the Centre of Excellence (COE) for Clinical Flow Cytometry. The recent feather that the hospital has added to its research cap is TB Champions by Global Health Strategies for the significant contribution in the field of tuberculosis. 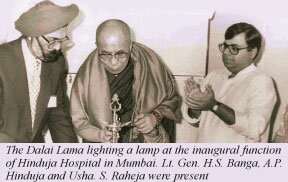 The hospital has been in the forefront of adopting new technologies. It was the first hospital in India to acquire Gamma Knife and Twin Speed MRI. Similarly, it is one of the few institutions to have a PET CT, Linear Accelerator with Multileaf Collimeter (MLC) and Micro MLC. The Radial Lounge, the first of its kind in India, is to carry out Coronary Angiography from hand in a sitting position. NAT Blood Testing, the state-of-the-art Guided Air Flow OTs and many more are thereby pioneering the new look of healthcare itself, in India.

Quality of Care rather than ROI has always guided the hospital. The returns have followed both tangibly and nationally through recognition. To integrate care it is developing its own Hospital Information Systems (HIS) and recently implemented the PACS system for radiology.  The MRI Suites at the Radiology department are the most unique and the only facility of its kind in western India, that provides diagnostic and treatment opportunities for various conditions with options to choose ambience that suits the patients mood. The hospital recently opened up a world class and most advanced Bone Marrow Transplant Unit.

ICUs form the core of tertiary care multi-specialty healthcare hospital. PD Hinduja Hospital & Medical Research Centre has developed a reputed ICU team, trained in quick response and advanced equipment for better patient care. The ICUs and OTs are monitored by a cross functional team consisting of ICU, Engineering and Infection Control Group for minimising instances of hospital acquired infections. The hospital has over 45 medical specialties with the exception of Obstetrics.

The doctors serving the institution have earned respect not only in their field of specialisation but also across healthcare nationally and internationally. The hospital takes extra efforts in sending its cross departmental teams to the West for advanced training in their category and the outcome has always been in favour of the patients. Recently, the team of doctors, nurses and other specialties who were sent to the US for advanced training in transplant, created a history by successfully doing a lung transplant on a lady.  Another landmark effort, being made by the hospital is in the area of Emergency Services and medical assistance at the consumers doorstep through Care @ Home and Poison Centre (Tele Assistance) services.

Short Stay Services: a unique concept service provided by the centre  can be defined as a dedicated hospital within a hospital with an exclusive service experience and quick turnaround for people with less serious surgery needs and requiring a short stay at the hospital. The hospital offers almost 122 surgeries under this system and has been overwhelmed with the response.