A bicycle ride to healthy life 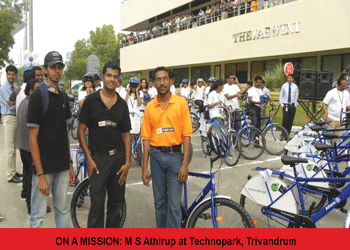 Rushing to offices in luxury cars, gobbling up junk food and lack of exerciseis what we often come across in big cities. Bequeathing a great sigh of relief to those who are juggling their life from the hectic schedule, Athis Bicycle Club (ABC) is on a health ride providing bicycles in the major cities of Kerala at a rate of Rs2 per hour.

A cycle enthusiast since childhood, it was M S Athirups dream to start a Cycle Club in his hometown, Thiruvananthapuram.In 2011, the software engineer kick-started ABC in the capital city of Kerala. With about 2,500 users, the club also has services in Kochi.The SMS-driven club has cycle racks at 15 major points in Thiruvananthapuram and 14 major points in Kochi and a few at Technopark.

Anyone with a mobile phone can become a member of the club by sending an applicationvia SMS (Type form to receive the application form) to 96455-11155.ABC chargesa membership fee of Rs 500, and Rs 50 monthly. Members can take a bicycle from any rack and return it to any rack. Entire operations are through mobile phones and payments can be made by depositing cash in a drop box at any rack.

As the people living in cities have a sedentary lifestyle, there are many health problems. ABC will be a great help for the people to stay healthy and our city will be also pollution-free, says M S Athirup.