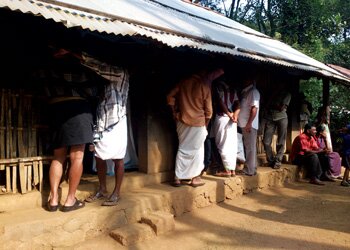 Vellanvaidyar of Thirunelli and Keluvaidyar of Kattikulam in the Wayanad district of Kerala are famous for their traditional way of treatment based on wild herbs. While Vellanvaidyar is known for the treatment of cancer, paralysis, fractured bones, asthma and diabetes, Keluvaidyar is famous for the treatment of cancer, asthma, diabetes and skin diseases like psoriasis and eczema. They receive patients from far and wide. The patients who seek treatment from them after hospitals fail to cure their diseases get much relief .

The misty mountains and greenery, this is what welcomes every traveller who enters Wayanad in Kerala. The folk etymology of the word Wayanad says it is a combination of Vayal (paddy field) and Naad (land), making it the land of paddy fields.

There are many tribes in this area and actually the story of Wayanad is the story of tribals. The tribes can be prominently classified into Paniyas, Adiyas, Kattunayakans, Kurichiyans,Kurumas,Ooralis, UraaliKurumas etc. These tribes still believe and practise their traditional medicines which involve a variety of wild herbs.

Vellanvaidyar of Thirunelli and Keluvaidyar of Kattikulam belong to the Kurichya tribe and both are famous for their traditional way of treatment based on wild herbs.

When the weather began to warm up, I set off to the foot of Thirunelli temple to meet Vellanvaidyar who is famous for the treatment of cancer, paralysis, fractured bones, asthma, diabetes etc.

The power of our traditional medicines is indeed unique. We have medicines meant for adults as well as children, he said as he examined a patient with a broken arm.

The Vaidyars assistant proudly narrated how his master had recently cured an eight-year-old paralytic girl who had been admitted in various hospitals in South India, but in vain. Finally, her parents met Vellanvaidyar. Often, people are reluctant to stick to traditional medicines, and keep it as a last resort, says the father of the child. He said the treatment for paralysis began with a detailed diagnosis, followed by the application of medicated oil. The Vaidyar then prepared the medication accordingly, and within a few weeks, the patient was cured partly. According to him, patients who first try modern medicines and then switch to traditional medicines take a longer time to get cured.

As per tribal customs, the ingredients used in the preparation of medicines are always kept as a secret. They believe the medicine loses its curing power if the details of the ingredients are revealed. Moreover, they do not follow the system of naming various wild herbs. Very little scripted information is passed down from our forefathers about the medicines. We identify the herbs by its features, says Vaidyar.

Vellanvaidyar is a renowned bone specialist too. He has a special set of formulae to treat fractures. For instance, egg is added to the solution to increase its adhesiveness in fracture treatment. The procedure is quiet simple. First, the dislocation is precisely identified, then it is cleared, and finally the fractured area is covered with a special combination of medicines.

Recovery is usually expected within a few days. The Vaidyar collects all his medicinal herbs from the neighbouring forests.

The Vaidyar has patients from India and abroad. They include celebrities and sports persons.

He is widely known for the treatment of cancer, asthma, diabetes and skin diseases like psoriasis and eczema.

Ours is a 100 percent traditional method of treatment. Unlike other alternative methods, we do not make use of metallic ingredients in our medicines and so the effect is immense, says Keluvaidyar. People suffering from various ailments come here from Bengaluru and Dubai for treatment. Workers assist him in the preparation of medicines in a small facility attached to his dispensary.

However, it was not easy for Kelu to become a famous Vaidyar. It took him years to collect the details of the traditional practitioners and document their treatment methods.

According to him, the data collection was a Herculean task as the old generation practitioners were unwilling to impart their knowledge to the new generation.

Keluvaidyar is very particular about the secrecy of the formulae of medicines he uses. Since the tribals do not have a system for naming the herbs, documentation of medicines is practically impossible. There arises the issue of patenting the medicines. We have some of the best and most effective medicines in the world, but we are not aptly credited for our efforts, says the practitioner with disappointment.

Every week, I go into the forests and stay there for a couple of days hunting for the right herbs, he said.