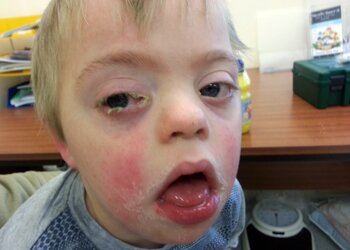 Perils of Down syndrome

Down syndrome is a genetic disorder, which causes lifelong intellectual disability and developmental delays in the affected.It is the most common chromosome abnormality in humans occurring in about one in 1000 babies. Dr Arun Oommen,Consultant Neurosurgeon, Lakeshore Hospital and Research Centre, Kochi, talks to SumithraSathyan about the severity of the disease, related health problems, the risk factors and how the severity of the disease can be reduced, and to help the victims improve the quality of their life. Excerpts from the interview:

Sometime back, a couple, 38-year-old Bhandari and his 34-yr-old wife Shelly came to my OP with their three-month-old son whom they got after a two-year wait. Obviously,theirs was a late marriage.They were really apprehensive and filled with doubt whether their son would be a floppy baby with small nose, almond eyes with epicanthic folds and small mouth with a protruding tongue. During pregnancy, various tests and ultrasound scanning had revealed a few abnormal lities, but they were reluctant to terminate the baby as they were already worried about the late conceiving plus the trauma of terminating the pregnancy.They decided to continue the pregnancy ready to take any risk. The child was diagnosed with Down syndrome leaving the hapless parents with a bunch of questions and apprehension about his future. How did it happen to us? Is it due to any environmental factors or any genetic defect in either of the parent? What will be the future of this child?Will subsequent sibling be the same? Let us look at the risk factors of Down syndrome first.

Having had one child with Down syndrome

Therisk for next child with Down syndrome is about 1 in 100.

Mothers who have Down syndrome

They are 50% more likely to give birth to a child with Down syndrome.

Folate metabolism is abnormal in mothers of children with Down syndrome and that this may be explained, in part, by a mutation in the MTHFR gene.

Theyinclude mild (IQ: 5070) or moderate (IQ: 3550) intellectual disability. Many developmental milestones are delayed. As they age, people with Down syndrome typically perform less compared to their peers.Commonly, those with Down syndrome have better language understanding than the ability to speak. Many have either a stutter or rapid and irregular speech, making it difficult to understand them. They typically do fairly well with social skills.Behaviour problems are not generally as great an issue as in other syndromes associated with intellectual disability in children. Mental illness occurs in nearly 30% and autism in 510%.

People with Down syndrome experience a wide range of emotions. While generally happy, symptoms of depression and anxiety may develop in early adulthood. Down syndrome is at increased risk of epileptic seizures which occur in 510% of children and up to 50% of adults. Many who live 40 years or longer develop dementia of the Alzheimer's type.

Otitis media with effusion  and chronic ear infection  due to poor eustachian tube function. Excessive ear wax can also cause hearing loss due to obstruction of the outer ear canal. Age-related hearing loss of the sensorineural type occurs at a much earlier age and affects 1070% of people with Down syndrome.

Itcan be due to a poorly or nonfunctioning thyroid at birth (known as congenital hypothyroidism) or due to an attack on the thyroid by the immune system, resulting in Graves disease or autoimmune hypothyroidism.Type 1 diabetes mellitus is also more common.

Constipation occurs in nearly half of the people with Down syndrome. Other congenital problems include duodenal atresia, pyloric stenosis, Meckel diverticulum,   imperforate anus, Celiac disease  and gastroesophageal reflux disease.

Males with Down usually do not father children, while females have lower rates of fertility. Fertility is estimated to be present in 3050% of women.Menopause typically occurs at an earlier age. The poor fertility in men is thought to be due to problems with sperm development; however, it may also be related to not being sexually active. Three instances of males with Down syndrome fathering children and 26 cases of women having children have been reported.

Can it be diagnosed before birth?

Several blood markers can be measured to predict the risk of Down syndrome during the first or second trimester. Testing in both trimesters is sometimes recommended and test results are often combined with ultrasound results. In the second trimester, often two or three tests are used in combination with two or three of: α-fetoprotein, unconjugated estriol, total hCG, and free βhCG detecting about 6070% of cases.

Testing of the mother's blood for fetal DNA is being studied and appears promising in the first trimester. The International Society for Prenatal Diagnosis considers it a reasonable screening option for those women whose pregnancies are at a high risk for trisomy 21. Accuracy has been reported at 98.6% in the first trimester of pregnancy. Confirmatory testing by invasive techniques (amniocentesis, chorionic villus sampling) is still required to confirm the screening result.

USG Findings that indicate increased risk when seen at 14 to 24 weeks of gestation include a small or no nasal bone, large ventricles, nuchal fold thickness, and an abnormal right subclavianartery.Increased fetal nuchal translucency (NT) indicates an increased risk of Down syndrome picking up 7580% of cases.

How can one manage a child with Down syndrome?

Efforts such as early childhood intervention, screening for common problems, medical treatment where indicated, a good family environment and work-related training can improve the development of children with Down syndrome. Education and proper care can improve quality of life. Raising a child with Down syndrome is more work for parents than raising an unaffected child. Typical childhood vaccinations are recommended.

A number of health organizations have issued recommendations for screening those with Down syndrome for particular diseases. This is recommended to be done systematically. At birth, all children should get an electrocardiogram and ultrasound of the heart. Surgical repair of heart problems may be required as early as three months of age. Heart valve problems may occur in young adults, and further ultrasound evaluation may be needed in adolescents and in early adulthood. Due to the elevated risk of testicular cancer, some recommend checking the person's testicles yearly.

Hearing aids or other amplificationdevices can be useful for language learning in those with hearing loss.]Speech therapy may be useful and is recommended to be started around nine months of age.As those with Down's typically have good hand-eye coordination, learning sign language may be possible. Augmentative and alternative communication methods, such as pointing, body language, objects, or pictures are often used to help with communication. Behavioural issues and mental illness are typically managed with counseling and/or medications.

Education programmes before reaching school age may be useful. School-age children with Down syndrome may benefit from inclusive education (whereby students of differing abilities are placed in classes with their peers of the same age), provided some adjustments are made to the curriculum.

Tympanostomy tubes are often needed and often more than one set during the person's childhood. Tonsillectomy is also often done to help with sleep apnea and throat infections. Surgery, however, does not always address the sleep apnea and a continuous positive airway pressure (CPAP) machine may be useful. Physical therapy and participation in physical education may improve motor skills.

Efforts to prevent respiratory syncytial virus (RSV) infection with human monoclonal antibodies should be considered, especially in those with heart problems. .

Plastic surgery has been suggested as a method of improving the appearance and thus the acceptance of people with Down. It has also been proposed as a way to improve speech.

Many alternative medical techniques used in Down syndrome include dietary changes, massage, chiropractics and naturopathy.

Efforts are underway to determine how the extra chromosome 21 material causes Down syndrome, and to develop treatments to improve intelligence in those with the syndrome. One hope is to use stem cells. Other methods being studied include the use of antioxidants, gamma secretase inhibition, adrenergic agonists, and memantine.