Taking up cudgels against breast cancer 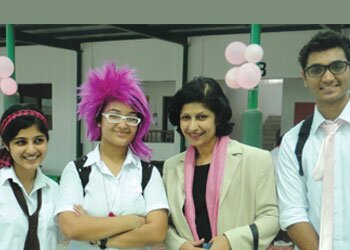 Do you know one out of eight women will end up with cancer in their lifetime? Shocking right! Has anyone of you thought of how could this alarming situation be tackled? Premi Mathew hailing from Kochi has a clear idea of resolving this menace. Protect your Momand Hair for Hopeare the initiatives of Premi to beat breast cancer by creating awareness

Protect your Momcampaign targeting students commenced two years ago. It was the personal experience of Premi Mathew that led to the establishment of two projects- Protect your Mom and Hair for Hope. She hopes to save all women from the threat of breast cancer through the campaign.

The idea was born when breast cancer hit my family. Since ours is a family of doctors, the lump was detected at Stage 2. PYM endeavours to warn every woman about lumps and other signs of breast cancer. Once cancer spreads, it turns fatal. But a few women go for regular checkups or even know that a simple self-examination could possibly save their lives. So we have initiated a unique way to create awareness among mothers through music, dance, art by children and youth. Mothers are usually too busy to take care of themselves so I thought it would be the best way to save every mom, says Premi Mathew, Founder, Protect your Momcampaign. Borrowing the strategy used by famous companies like Maggie and McDonalds, PYM uses pester power to make mothers do self-exam for lumps. 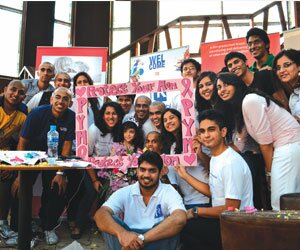 The fact that cancer patients lose their hair due to chemotherapies pained Premi very much and as a solution to the problem, she came up with Hair for Hopecampaign. Recently, when Nisha Mani, former Miss Kerala and wife of Jose K Mani, MP, cut her lustrous hair for the good cause, more people got inspired to be a part of this noble cause. To attract more school and college students to the cause, now young boys and girls in Dubai are actively involved in this campaign.

Wigs made of natural hair are better.The ideal length of cutting hair to make wigs in India is 15 inches (since Indian women prefer longer hair) and in the US eight inches. Hair should be shampooed, dried and is tied into a pony tail before it is snipped. Women usually trim their hair and dump it in the bin, so why not use it for a cause. The campaign has already identified a wig maker at Kochi viz Hair craft who has agreed to convert hair into wigs @Rs 3000 if donors supply 250 gms of hair. Chemically treated hair cannot be used. They also have a sponsor to pay for the charges of making a wig and a number of parlours have also expressed interest in supporting the campaign. Any school who would like to organise a hair donation campaign could contact them via email for all assistance. Global Public School was the first in India to organise a mass hair donation with 13 people donating their hair within a week of the launch.

The PYM design and win contest started in 2011 invites people, especially students, to create awareness through skits, dances, posters etc. With over 100 good entries in 2012, including skits, dances, posters and videos at zero expense, PYM hopes to ensure 100 per cent awareness about lumps and early signs of breast cancer. Students in India can also win two air tickets to Abu Dhabi by emailing posters, songs, and dances to [email protected] The best entries could be viewed on its website and Facebook page.

With over 10,000 members and a youngest brand ambassador of just eight years old, PYM has 3,500 fans in Facebook. Colleges/schools in India could join the campaign by organising even small PYM events and emailing the pictures to [email protected]

Giving an opportunity to the people who wish to become a reason to bring smiles on the faces of the cancer patients, PYM endeavours to make it a global movement of students. We want a student in every school and college in the world to promote the cause and spread the word until we educate the whole world about self-examination. If a five minute self-exam could save a life, every woman should know about it and we can do it without any expense through this movement, adds the founder of Protect your Momcampaign.

Since Premi has been living with family in Dubai for 15 years, Protect your Mom campaign is more active there. The campaign that has succeeded in warning millions of people against breast cancer through Facebook and You Tube in the UAE was nominated for the 2012 Emirates Woman Award.