Giving a new lease of life 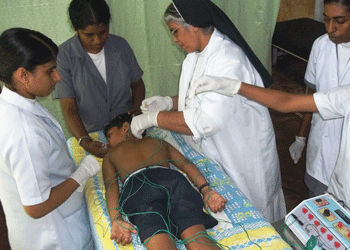 Innovative methods of treatments could bring out remarkable results in many chronic illnesses. When old ways of treatment fail, new ones succeed, provided there should be a leading light to pave the new path

Jivadhara Institute of Neuro Development and Research, promoted by Jivadhara Charitable Research,is a medical institution established in 2009 at AngamalyinErnakulam district of Kerala. It was the support and acknowledgement given by Prof Dr PK Rajiv, Head of NeonatologyDepartment,NMCSpeciality Hospital in Dubai, which encouraged DrSr Mary Eassy, MD,PhD, to start Jivadhara Institute.

Starting their daily routine in the morning at 5, the treatment goes on till 6 in the evening. The Jivadharatreatmentcombining two alternative medicines- Acupuncture and Electrohomeopathy- is used for various conditions such as cerebral palsy (CP), mental retardation (MR), autism, behavioral disorders and genetic disorders like Down Syndrome, Rett Syndrome and Edward Syndrome. Acupuncture treatment helps create balance in the bodys vital energy while Electrohomeopathy medicine brings balance in the bodys vital fluids.

A childs mental development happens two years after birth so, if a child afflicted with any such disease is brought here as early as possible, the Jivadhara treatment can cure the disease. As the age and the complexity of the disease increase,results could be poor, says DrMaryEassy, Director of Jivadhara Institute.

We make sure that the treatment and service provided here is the best, added Sr Mary Eassy. Depending onthe needs of each child,physiotherapy, speechtherapy, vocational skill training, prayer therapy, music therapy and counselling are included intheJivadharatreatment.  The treatment phase is important in Jivadhara and follows a modular system whereby each course of treatment lasts 12 days followed by an interval of 15 days before the start of the next course. I have just joined here. I gotan opportunity to understand the concept of Acupuncture and Electrohomeopathy, says Sanjay Manuel Nanda, Pediatrician, Jivadhara Institute of Neuro Development and Research.

I had difficulties in my pregnancy and due to that my child had blood clot and was in the ventilator for many weeks. We had lost all our hopes and were in a great dilemma. It was then our doctor referred us to Sr Mary Eassy. He was five months old when we started the treatment.Heslowlystarted responding positively to each course of treatment. After 12 courses, Emmanuel became perfectly alright. Now, he is four years old and is the most smart and studious student in his class. We are really grateful toSr Mary Eassy and to the Jivadhara treatment, says Leena, mother of Emmanuel.

Struggling to accommodate the patients in a small building, Sr Mary Eassywants to increase hospital space with help from people. There are buildings in the compound, but they are badly maintained and cannot be used for treatment.

The vision of Sr Mary Eassy is to extend their service by setting up JivadharaInstitute in different parts of the world to bring hopes and happiness in the life of millions.