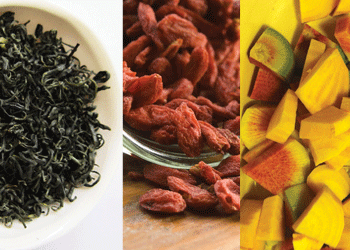 While recommending an appropriate diet, Tibetan physicians consider which types of food are harmful and which might be beneficial, the amount of food to be eaten, the number of meals per day and the proper meal times. Food is analysed based on its qualities and nature as defined by a five-element theory. All of the materials which make up our universe are based on the qualities of five basic elements which are described in the ancient physics texts of Tibetan Medicine.

Ancient Tibetans lived in direct contact with the natural environment. They understood through experience and study that the forces manifest in nature directly correlate with and influence the functioning of the human organism. In the theory of the five elements, we see an effort to define the qualities of the basic forces which exist in nature. They are named for their most identifiable manifestations: earth, water, fire, wind and space.

Specific arrangements of the five elements which occur during embryological development form the three basic principles of physical function (Wind, Bile, Phlegm). This is important because the taste of different foods, their resulting natures, and therefore their effects on the human organism are also dictated by the specific arrangements of elements which make up the food. This principle enables practitioners to think intelligently about diet and health which are relative to each individual patient's lifestyle, environment and health condition.

The recommended diet varies significantly depending on the specific etiology experienced by the individual patient. Because stress is a significant trigger, Wind is usually a contributing factor. Therefore, a proper therapeutic diet must routinely treat Wind imbalances. Depending on the presence of imbalances of Bile and/or Phlegm additional foods must be added to or removed from the diet.

Patients benefit from a diet of heavy nutritious foods, such as meat, cheese, butter, and soups made with bones (e.g. chicken soup). In the case of a Wind /Bile disorder, or some Mukpo disorders, or if the patient is a vegetarian, animal-based foods can be replaced with other foods. Substitutes include avocadoes, vegetable, legume or grain-based soups, onion, asparagus, and oats.Foods that are irritating or 'rough' in nature should be avoided, because they would impede or distort the movement and circulation which is essential for the function of Wind.

These patients observe the Wind dietary guidelines while incorporating additional principles that are tailored to the Bile condition. In this case, a simple vegetarian diet is suitable, including legumes, potatoes, cumin, coriander, fenugreek, artichoke, bitter vegetables (e.g. dandelion), and turnips. Foods that are heating in nature should be avoided. These include peanut butter, mustard, spices, garlic, ginger, onion, alcohol, meats [esp. lamb], oily and greasy foods, and soups made with bones.

These patients adopt a heating diet with respect to both the nature and the temperature of the food. For example, they consume hot water, cooked foods, pomegranates, sheep cheese, yogurt, ginger radish, honey, ginger, and garlic. They avoid cold drinks and raw foods such as salads, potatoes, tomatoes, eggplant, bell peppers, and sugar.

Mukpo is the combined dysfunction of all three energies. This is a complex chronic condition in which each of the imbalances ultimately affects the digestive and metabolic functions. The diet includes fresh, cooked foods to facilitate the severely compromised digestion that is typical of this condition. Recommended foods include fresh meat, dairy products, vegetables, fruits, and whole grains. This condition is exacerbated by garlic, tomatoes eggplant, bell peppers, and foods that are aged, fermented, cured, smoked, sour, chilled, oily, or processed.